I was really stressed out and badly in need of some downtime.

I opened up Avernum 5 to blow off some steam. If you’re unfamiliar with Spiderweb Software’s offerings, it’s the brainchild of Jeff Vogel who was an indie developer before it was cool. When you were known as “shareware” and laughed out of the room at conventions with your Ziplocks full of floppies. He made the Avernum and Geneforge series which are these really intense and grindy RPGs that also have plenty of story and emotionally-driven decision-making behind them: he did dubious morality and decision-making in large and open game worlds before it was in vogue. 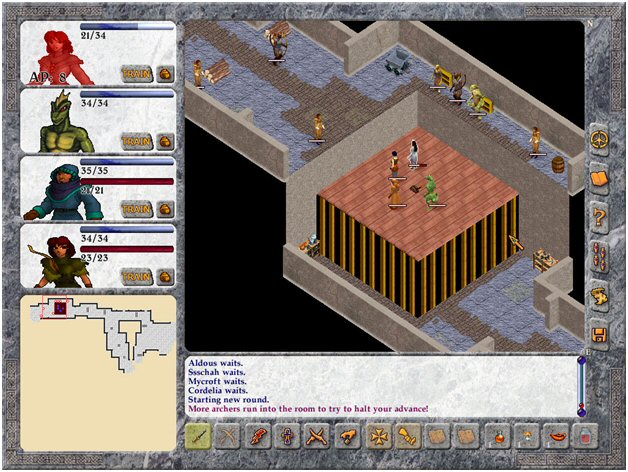 I’ve been a longtime fan of Spiderweb, literally for over half my life. I played Blades of Exile when it was a small demo I got off the MacWorld monthly CD and since I was all of 12 years old, I never got to send away for the full version. (Steam and PayPal, and being able to buy a card with cash if I had some, were a long way from our imaginations. This was in the days of having to mail in order forms with a check or money order because you couldn’t transmit credit card info through dial-up.)

So, the basic premise of Avernum is that it’s this subterranean world where all the undesirables are cast off from the surface. In later games people start voluntarily emigrating from the surface to find fortune and get away from craziness up above. Your party needs to build up their skills, paying money that depletes so fast to stat trainers as well as using up those rarer skill points you get upon leveling up or finding crystals and potions that imbue you with them. There’s core skills as well as leveling up for spells, plus miscellaneous skills that really let you fully experience all that the map and those intricate grindy dungeons have to offer. In Geneforge, you can build up other skills like being able to disarm tools and traps to sneak around, or leadership that lets you sweet talk your way out of sticky situations. Not so much in Avernum: the puzzles are more or less based on directly fighting your way through and using either might or magic to smite your enemies.

Now look, I like that Jeff challenges us on both the combat and storyline fronts. You’re not babied at all when it comes to choosing a side or being side-less, you can choose what paths to take and form your own opinions. The combat is challenging but satisfying most of the time. I played Nethergate, Geneforge, and the first four Avernum games without having to cheat, relishing in that challenge. But I found that in Avernum 5 I HAD to cheat or else I couldn’t get past certain points because holy shit, this game is UNFORGIVING. (Even freakin TV Tropes pointed this out!) The combat stopped being satisfying at two distinct points in the game because it was literally impossible both for how undersupplied I was and that there was no way to advance from the current levels my characters to where they needed to be to beat the current foes without cheating. I was at the point where you have to uncover the treachery in the sentinel workshop and had completely run out of supplies. Running out of supplies in Avernum 5 isn’t like running out in most RPGs where you can just go back to town and buy more health potions or whatever: in keeping with the setting of the game where most of the cave settlements are economically depressed, once you buy whatever amount of potions that seller has available, they’re gone. They don’t respawn after X amount of turns and become available for purchase again. You can also go to alchemist NPCs to make potions for you, and I had enough healing herbs to smoke up the joint many times over but it was so rare to find energetic herbs to make magic potions. I really needed lots of energy potions that would help replenish my two spellcasters’ spell points in long battles.

Worse yet, I couldn’t just find a few closed in areas that constantly respawned enemies on par with my characters’ levels to grind so I could get stronger: no, that damn Prime Sentinel kept murdalizing me if its minions elsewhere in the shop didn’t get me first because I was totally stuck at the level I was currently at with no hope of getting ahead. No exploring the northeast quadrant either: I couldn’t get past that group of sentinels right outside the pillars even when powered up and shielded aplenty, plus summoning a few chew toys. So I had to go into cheat mode to beat the crap out of Prime Sentinel and move onto the Anama Lands.

Anama Lands ensue with little incident. Chitrachs are tough but I can fight them without cheating. Chitrach Queen is a tough challenge but I’m tougher and beat her fair and square. Move on…don’t want to give away spoilers for the story, but I’ll just say that you have a not-really-surprising betrayal up ahead but then it devolves into the most ridiculously difficult and tedious part of the game that would make even the most die-hard RPG geek ragequit. These Darkside Loyalist mooks spawn faster than the Duggar family on fertility drugs and do. Not. STOP. It’s unclear where to go and backtracking makes your blood pressure escalate as if you ate an entire cheesecake after smoking a carton of Parliaments because said Loyalists trail behind you and refuse to leave as if they were trying to sell you a timeshare. And once again, you’re definitely out of supplies at this point even if you’ve got thousands of coins, by virtue that there’s just NO supply left in any of the shops and no herbs left to make energy elixirs with. This part of the game made my spelunking through the sentinel workshop look like squashing an ant. It was impossible to get past this area of the game without cheating. There was just no way to replenish health and spell points otherwise.

And it made me think. In a majority of video game worlds, you truly get ahead based on merit. You can grind your stats until you’re strong enough to get past a certain area or fight that boss battle, as well as do enough looting and questing to afford the supplies and training you need for these battles. That’s honestly how a lot of Spiderweb games are: you don’t need to cheat but it’s a lot harder if you don’t do it. In previous Avernum games, it was difficult to beat them but not totally undoable.

This time? This shit was straight up impossible. How was I supposed to both find the right route as well as clobber all these Darkside Loyalists plus all their warped wolves then eventually their wizard and worse yet, dervish, when I had but one potion left?!

There was no way I was going to get past this part of the game, let alone beat it, unless I typed in cheat commands to replenish my health and spell points and get 1337 powerups before battles, plus send me back to Blackchasm Outpost if I really got in a jam I where I couldn’t leave the workshop the way I came (barely doable in the sentinel workshop based on the layout, but literally impossible by design to do in the Anama Lands once the Darkside Loyalists invade.)

I could finally stop cheating when I made it to the Azure Gallery and was able to find potions plus go back and forth to town to heal between battles, but warily kept my fingers on Shift-D in case I needed it again just because I wanted to move forward with the story and not spend hours fighting when I have two businesses and a social life to get back to in the real world. While I did comment to myself numerous times that there were no way I could’ve won these battles without cheating, it didn’t diminish my enjoyment of Avernum 5.

But it begs the question: is it wrong to cheat when life gets hard? Or flat out impossible?

In the grand scheme of things this isn’t a big deal. People have been looking for cheat codes since the dawn of video gaming. Hello, the Game Genie! Most of those old NES games were just Unwinnable By Design to the point that some of them were virtually unenjoyable without it. I didn’t want to egregiously use the cheat codes for tons of money, extra skills, and the like. I wanted my experience to be as authentic as possible and only used them to get out of masochistic areas like the invasion of the Anama Lands. But it was still literally impossible without cheating.

Other games even make cracks at this concept! In Space Quest VI, you have to help out Elmo from ScumSoft to get a code that unlocks a special maneuver in Stooge Fighter. You can’t pass this part of the game without it because Stooge Fighter by itself is literally unwinnable by design.

The world at large doesn’t work like most games where you simply get ahead based on merit 100% of the time. Sometimes that shit is impossible without a cheat code.

A cheat code in real life could be money, connections, or just dumb luck. Whatever it is, it’s something most people don’t have and can’t call upon in a jam. Hell, I feel like I’ve cheated the system sometimes: I might’ve had terrible luck in my old career, but insanely good luck when it came to housing expenses. Sonic Toad’s first client totally just fell in my lap right after Indiecade East last year without me even trying. Virtually every guy I’ve ever dated or slept with has been drastically better-looking than me. I definitely feel like I’ve pressed buttons on a cheat menu somewhere.

So does it constitute cheating when you hit a hidden button because it’s literally impossible to stay afloat, let alone get ahead, otherwise because the world around you has been rigged? Doesn’t that make the people rigging the system the real cheaters?

Just some food for thought for both game design and life itself. I now have to go fight the Darkside Loyalists with Shift-D permanently pressed so I can see the ending before getting back to working on my own game that won’t be as masochistic.