The title is a reference to my favorite Crumbsuckers song “Live to Work”, which I referenced in this post about relationships being strained by the pursuit of entrepreneurship. I not only feel that this song still embodies the incredibly toxic culture of the same moniker that has utterly permeated Americans’ brains, but also pockets of the gaming industry that just make it seem cultish and like hell on earth.

This post is partly in response to the Alex St. John blow-up on VentureBeat that just took place this weekend, but mostly addresses the fact that his rants are a symptom of a much bigger cultural and systemic problem.

For posterity, here’s some NYHC wisdom for you.

These are the ideas they drill in your head!

I don’t want to give St. John any more pageviews than he already has, and frankly, Rami Ismail already addressed this shit better than I probably could.

Because I did not come from a AAA or software engineering background before going into game development. I experienced a different kind of crunch being forced to work seven days a week during  tax season. I did not have the kind of benefits most normal humans get with AAA and tech jobs for my goddamn suffering. I have my gripes with the big fat cesspool that is the tax industry, many in fact. So while I haven’t been forced to be a writer or producer under adverse circumstances for someone else, I have been forced to do taxes under those conditions and I truly believe that if you subject your employees to these kinds of conditions and just expect to squeeze more and more out of them, you are a shitty fucking travesty of a human being.

America has this HUGE problem with making people spend too much time at work, even in entrepreneurial circles people love to sit around comparing dick size over how many hours they put in and this eyeroll-worthy attitude of demanding medals of honor for not sleeping enough despite how unhealthy it is.

Case in point, as I’m learning about real estate investment– something I’m doing to further my quest in helping other creatives and rebels be free from hellish and all-consuming work environments– from awesome resources like Afford Anything and The Accidental Landlord, I’ve come across some really toxic spaces like Bigger Pockets. While BP does have some genuinely useful information about real estate investing and other ways to make and save money, I don’t like giving them traffic because I find their community and environs to overall be obnoxiously toxic and adamantly espousing this “live to work” mentality. Like this article. Is that NOT the most miserable and mentally unsound pile of shit you’ve ever read? I bet that author is a lot of fun at parties. If he ever goes to any, that is. (And dude, if I didn’t go out to eat as often as I do because I need to escape from my home which IS my office, I wouldn’t have stumbled across all the off-the-wall shit I put in my games and writing: like the guy eating clam chowder on the bus who became my fucking muse!)

This whole obsession with being productive every minute of the day is also actually pretty counter-productive.

It makes you feel guilty for needing some rest or taking a vacation.

Like that you’re a lazy slacker if you put in 40 hours a week– or less– regardless of if you’re entrepreneurial or you work for somebody else.

Yet Americans take the least amount of vacations and put in the most hours compared to other industrialized nations.

Or as St. John put it, the now age-old “stupid Millennial hipsters whining about doing REAL WORK” rebuttal because there’s more to life than being a wage slave.

Nothing, AND I MEAN NOTHING, is worth slaving your life away in an office.

Crunch is ineffective in all industries because all it does just chip away at morale and make your subordinates want to see you roast in hell, and it’s also a quality over quantity thing: do you want a whole bunch of half-assed work done because no one has time to see their families and friends, relax, and take care of themselves, or would you rather have a smaller amount of really quality work? I’m a big fan of the latter.

That’s why I hustle, and work with other hustlers. That’s why I charge what I charge for my services and wouldn’t make someone else take the piss over their rates and the kind of work that they do.

I chose the indie developer life because I didn’t want someone else to impose crunch on me in any way, shape, or form; to have the freedom to try new things on both the business and creative fronts. Because I would sooner work more than 40 hours a week for ME, not for someone else, since I get to own the results of my work and have the freedom to pursue as many or few income streams as possible. Because yes, it’s my fucking passion.

But passion is never an excuse to underpay someone or treat them like a subhuman.

Sometimes I do make a conscious choice to take a higher-paying longer-term consulting gig so I can save the money from it to work on my passions without another gig on top of it. Or to put in more work on my own site and game design docs if I don’t have a lot happening socially.

But if someone wanted to use my passion for writing, game development, subculture, justice, and my other interests as an excuse to pay me some insulting rate or expect a ridiculous amount of hours from me, I got a few choice words: go play with your uncle’s dick.

Life doesn’t wait. No profession or paycheck is worth putting your health at risk and forgoing things like spending time with your friends and family, being active in your community and taking part in civics and causes that matter to you.

Just because something is your passion doesn’t mean it has to consume you. Hell, it usually doesn’t end too well when it does. 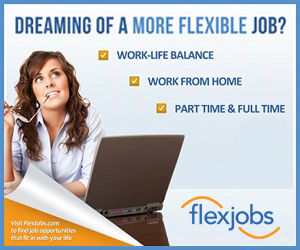 I carefully choose partners that reflect my values, and FlexJobs sure as hell does. If you’re sick of crunch and looking for a new gig, these guys can help in any industry.