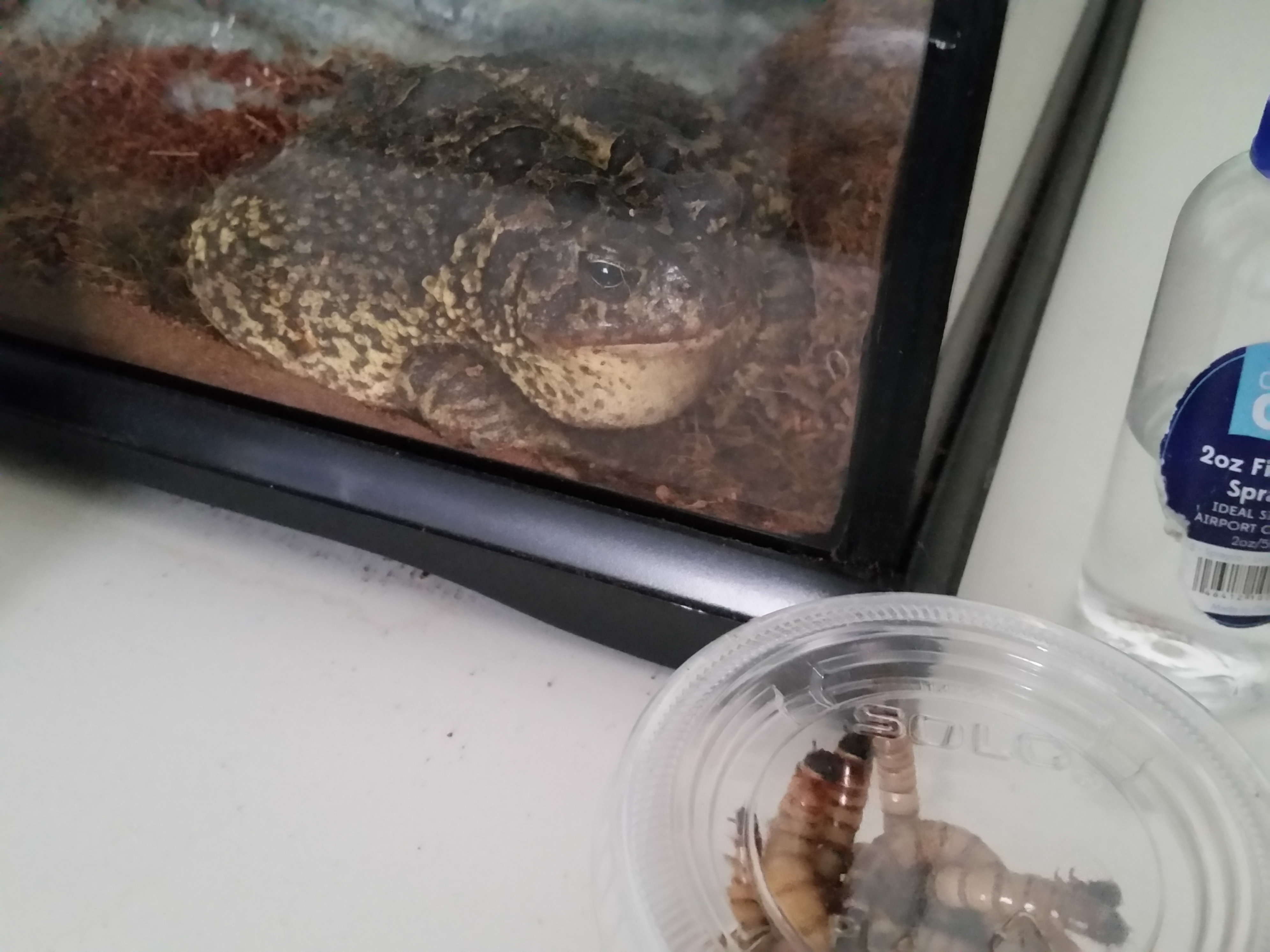 The last really good picture I got of Yael and how I'd rather remember her: happily angling for the tasty worms she loved so much.

This post is actually about a few weeks overdue, but I've been incredibly depressed since losing Yael and lost track of the time.

My sweetness lost her battle with a bacterial infection/edema she picked up at the kennel while I was away at East Coast Game Dev Con, and while I and our vet tried all we could she was very weak from refusing to eat while she was on antibiotics. I managed to get a few bugs in her but she just held on long enough to say goodbye.

Yael was truly a once in a lifetime companion. She went from shyly backing up against the tank when I first brought her home to learning words and hopping right up to me with a big toady kiss when she knew I was sad or having a shitty day, or if she just wanted to make a great day even better. She didn't verbally communicate, but she would put her paw on my wrist to make me feel better or simply to tell me she loved me back. Many people think toads aren't capable of bonding with humans let alone showing affection: but Yael definitely shattered those expectations and taught a lot of people about bonding with a nontraditional pet.

To honor Yael's memory, I figured I'd take a moment to talk about pet loss. Because if you've lost your pet and feel like a huge fucking hole has been torn in your heart and you're getting weird looks from people, I want you to know you're not alone.

When you're single and you don't have kids, pets' lives take on a great deal of significance. I'm not saying that couples and parents don't hurt like hell upon the death of a pet: but dude, I don't use "crazy toad lady" as an exaggeration. Yael has been a huge part of my life. This very business was named after her, my logos and vectors modeled after her and her lovely wart patterns. And losing her has been incredibly tearful and rough.

She was an incredibly significant part of my life and a void is there because she's not there to greet me when I come home, whether I just went to the gym for an hour or I was gone all day. We had our little rituals, like the standard things for amphibian care like changing her water every day and giving her bugs every other day, and I always said good night and good morning to her.

My home hasn't felt the same anymore without her presence. If you feel the same way, it's totally normal: losing all the joy that your furry, warty, feathery, or other type of companion brings you is a damn hard thing to lose.

Pet Love You Unconditionally and Are Always There

Humans have a way of unwittingly screwing each other over even if they don't mean it. You know, you can be in a relationship and one person is getting more than they're giving and it breeds resentment so you eventually call it quits. Or the type of relationship served you well in an earlier part of your life but doesn't now. Friends can develop different lifestyles and interests and suddenly find themselves drifting apart, even if they didn't want to; and there's always the friends who move away because of jobs, families, and getting priced out among other things. You try like hell to even just meet a friend for a cup of coffee and it's like pulling teeth. Then there's the parents who have a hard time loving you for who you are instead of who they hoped you'd be.

But at the same time, humans crave closeness and companionship, even the most reclusive among us. Yael didn't blow off plans with me because of something else she'd rather be doing than hang out with me, or give me the brush off because a cuter human came along. I always knew I could count on her showing me unconditional love, and that she'd always be there. It's hard, if not straight up impossible in many cases, to find a human who will both unconditionally love you in some capacity (romantic, friendship, or otherwise) and actually be there for you.

Because you're with your pet every day and they're reliant on you, fulfilling that need to care, that closeness and significance is why you can't "just get over it" and you're not weird or damaged for seriously crying more than when you lost a parent or a friend, or being depressed for far longer.

Some people just won't get it so it's important that you find other animal lovers who do.

There are actually pet loss bereavement resources online and offline depending on where you live, even therapists who deal solely in this area.

If You Want Another Pet, Only You Know When the Right Time Is

Traditionally, a lot of people get another pet right away if their companion dies. A lot of pet loss bereavement resources say that this isn't a good idea, but only you really know. If you're feeling really lonely and distraught, it could be a good idea if you'd rather not be totally alone. But if you're not ready, you're not ready.

I have the room in my home and heart for another amphibious baby in the future. I don't know when I'll be ready. Yael will always be the original Indie Toad, and Sonic Toad, and can't be replaced. Even if I get another bufo terrestris, she'll have a different personality and quirks than Yael did. She could take longer or shorter to get used to me. No toad could possibly replace Yael, and I'm not ready to start a new toad-human bond yet.

I know that Yael would want me to be happy, with other humans at home and out and about, and making money at home with no pants on. Wherever she is now, I hope there's plenty of worms, roaches, and toad litter suitable for burrowing.