Not that long ago, I was browsing LinkedIn which has devolved mostly into a Facebook kind of free-for-all with tons of stupid and irrelevant images and quizzes floating around. Normally, I just disregard them while trying to find something interesting or see what old colleagues are up to but then I stumbled across one of those pictures that really belonged on FB which actually spoke to me on a basar level. 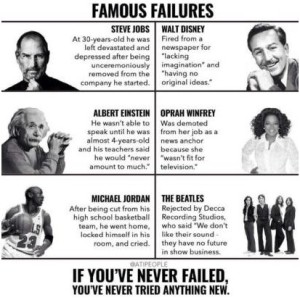 Normally I can’t stand those eleventy billion posts that scream “Just keep trying! Look at this famous person who succeeded!” because they’re always posted by these people with six or seven figure incomes and IMHO, provide nothing of value to an entrepreneur who is struggling and suffering with confidence issues as a result. Personally I think that having people closer to you giving genuine encouragement and advice to keep you going is better, but sometimes we do need to see those eleventy billion reminders to not give up (even if you want nothing more than to smack those overly perky people who have no fucking idea how hard you’re struggling.) Every now and then, we need to hear about those uber-famous and successful people and all the failures and travails they went through because people tend to only focus on their success or wealth.

But well, EVERYONE talks about Oprah and Steve Jobs and shit. I think we need to dig deeper and think of success and determination on a less mainstream level. And I love, love, LOVE terrible cult films. Aside from going to punk shows and game dev stuff, one of my other favorite pastimes is getting together with my friends to watch the RiffTrax

boys dig into a major stinker or esoteric B-movie.

So in combining my love of terrible movies with looking beyond the surface at success stories, I’m going to look at The Room and Dangerous Men and how they correlate with refusal to give up!

, one of my girlfriends and I hit up the Alamo Drafthouse in Yonkers for an extremely limited showing of John Rad’s Dangerous Men. We almost laughed ourselves into asthma attacks at how little sense the plot or lack thereof made, the overall narminess of the characters who mostly came the hell outta nowhere, the poor editing, and soundtrack that felt like it was snitched off of a 1992 DOS game. Everyone else in the theater roared along with us and brilliant commentary was made left and right, with all of us concluding before we walked out that Dangerous Men was just plain BEGGING for a Rifftrax. (Vote for it to get riffed!)

I didn’t know anything about the backstory until after we saw the movie and I was utterly fascinated. To give you an index card sized breakdown if you don’t feel like reading the Vanity Fair piece I linked, Dangerous Men was made over a nearly two-decade period and unseen until almost 40 years after its inception. John Rad (American-ized from Jahangir Salehi Yeganehrad) was a wealthy filmmaker from Tehran who happened to be well-connected to the Shah but he became an architect pursuing film on the side upon coming to America. His family fled Iran in 1979 after the Shah’s regime crumbled and much of the Rad family’s wealth scattered to the winds as a result. Rad started filming Dangerous Men that same year as time and money permitted and production didn’t cease until 1995, because according to his daughter “he didn’t like going into debt.” Rad tried to get a distributor for the completed print numerous times and failed, so the film was not shown until 2005 when he paid five LA theaters to show it for a week. Drafthouse Films picked up the rights to Dangerous Men in 2015 and gave it a proper release eight years after Rad’s death at 70.

. Wiseau’s origins are shrouded in mystery and he never reveals his true age, often snarkily telling people that he’s a vampire. Filmgoers’ jaws dropped upon the fetishization of the term “best friend” throughout the film and wondered if Wiseau has any inkling of how human relationships actually work. While The Room didn’t take nearly as long as Dangerous Men to come to fruition, writing to execution still took a couple years. Wiseau had the same trouble pitching distributors that Rad did and got rejection notices from them faster than one normally would. But he eventually cut and print The Room and had an opening night in 2004. Despite the resentment that had festered between Wiseau and his cast and crew, not even they could feel any animosity that night. That’s because dude did precisely what he set out to do since his youth: he made a movie and released it in an American cinema. 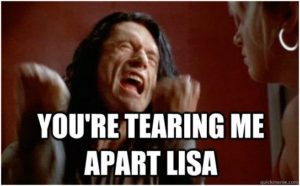 Tommy Wiseau represents the American Dream to a lot of people in that he came to America with barely two nickels to rub together and overcame several obstacles to make a film that would be remembered. Maybe it’s not remembered for the reasons he intended it to be, but it’s remembered no less!

Luck in getting an audience also came into play with both Rad’s and Wiseau’s stories: when Dangerous Men was being run for that one week, it happened to be seen by the founder of Cinefamily who gaped in amazement at how you couldn’t possibly TRY to make a movie this bad and then got other people to see it and elevate it to cult status, eventually selling out of its limited screenings and making it one of the most talked-about films behind the scenes at film festivals. When The Room was still being shown in its limited release, it was group of film students who were so fascinated at its terrible beauty that they started taking other people with them and requesting that more theaters do midnight showings. People started dressing up in tuxedos throwing around a football and talking back at the screen. A cult was born. Wiseau began referring to The Room as a black comedy to attempt saving face from people not seeing his cinematic debut as the serious love story he saw it as. But he found an audience no less.

What does all this tell us?

Sometimes you have to let go of what your original vision or goal was and just get something done for the sake of getting it done: even if it takes an amount of years passing to be old enough to run for President. Yes, it’s nice to be reminded that Oprah was dirt poor and told that she’d never make it on TV because she was fat and black and now she’s a billionaire, and that Walt Disney was kicked around a lot by the entertainment industry and lost a lot of money on his own ideas until Mickey Mouse was born in 1928. All the people in that image are household names. It’s too easy to bring up a household name.

Business magazines love talking about the companies that experience super fast growth and already have money: not the mom-and-pop shops that take the better part of a decade to turn a profit let alone a livable profit. The media in general loves to parade around the 20-somethings who make some killer app and have more money by 30 than entire populations of coastal cities would ever see in their collective lives. Or the 30-something filmmaker who makes one blockbuster hit after another, the financier who has money spilling out of every orifice.

What about the people whose success you don’t really hear about because their accomplishments and/or incomes are mind-blowing to the average person but hardly a blip on the radar to the bigwigs? Or are just famous for different reasons like these filmmakers?

The Room found a cult following and Dangerous Men made it to the silver screen despite being made over nearly three decades. There was no obsessing over how much these films made upon finally securing distributorship. No, they’re not movies that will be referenced 70-someodd years later outside of B-movie circles. But they are the byproduct of passion, determination, and sheer batshittery that led them to come to fruition. People are talking about Dangerous Men with this earnest reverence for how entertaining it is without even uttering the word “bad”, and there is a Rocky Horror level of devotion to The Room. These guys just did whatever they had to do to make and finish these movies and get them seen, even if it took several years and people laughed at them.

Think of that when you feel like a failure because it’s taking a long time to get your game released or book written or making a profit from consulting. Don’t give up for you might find money or success in a different manner than you expected.

how should vidalista be taken

tadalafil for sale on ebay

generic without a doctor generic dapoxetine

how to use cialis 5 mg

azithromycin without a doctor prescription

hydroxychloroquine risks and side effects

hydroxychloroquine for sale over the counter

effect of tadalafil on girls

what is viagra for women

what infections does azithromycin treat

cialis without a prescription

where to buy hydroxychloroquine

keflex vs amoxicillin for strep

how long before aurogra works